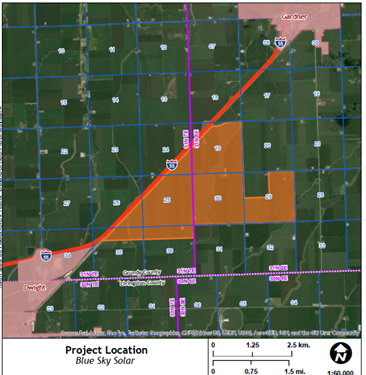 Scout Clean Energy, a Colorado-based developer of renewable energy, is now the owner and operator of Blue Sky Solar. It was originally developed by RES (Renewable Energy Systems). According to the approved development plans, a 369-MW DC solar facility will be built on 2,700 acres in Grundy County.

“We are pleased to complete another renewables investment with the team at RES,” says Michael Rucker, CEO and founder of Scout Clean Energy. “The Blue Sky project is one of the largest solar projects approved to date in the PJM and is the second Midwest solar project Scout has added to its expanding renewables portfolio this year.”

“Blue Sky is a uniquely located project enabling the supply of significant solar power to the Greater Chicago region,” Rucker adds. “Blue Sky further diversifies our fleet across wind, solar and storage. Scout will close out 2021 with over 12,000 MW DC in our development pipeline and more than 1,200 MW DC of renewable projects in operation across the United States.”

Blue Sky was unanimously approved for a special use license with Grundy County in December 2020. This was under the Grundy County Solar Ordinance. RES began interconnection studies and land acquisition on the site in 2018.  The project should be granted its full interconnection agreement by the third quarter in 2022.

“We are excited to be working with Scout Clean Energy again,” states John Rohde, CEO of RES in the Americas. “We are proud of our work in developing projects that focus on clean energy and a sustainable future. This deal and our partnership with Scout bring us closer to our vision of a future where everyone has access to affordable zero carbon energy.”

Blue Sky, which will be built near Morris, is expected to start commercial operations in 2024. Blue Sky will be able to supply approximately 585,000 MWh annually of carbon-free, renewable electricity for the PJM grid when it reaches commercial operation.

“Scout expects to invest over $400 million to bring Blue Sky through construction and into operations and will support over twenty new jobs in the ongoing operations phase. The power  generated from this project will enable Scout to bring the many benefits of low cost and carbon-free solar energy to central Illinois,” explained Rucker.

A Property Tax Abatement Agreement has been signed with all taxing jurisdictions of Grundy County. It is estimated that the county’s taxing jurisdictions will earn $36.3 million in tax revenue during the project’s life. $25.4 million will be earmarked for the local school district.

“Scout has accomplished so much in the last year which is a testament to our incredible team of experienced renewable energy professionals and to the ongoing support provided by our sponsor, Quinbrook Infrastructure Partners,” continues Rucker. “Blue Sky Solar is among our first utility-scale solar projects and is another major step in Scout’s rapid growth as a leading U.S. renewable energy developer, owner and operator. We expect to announce further project investments and closings of PPAs in early 2022.”

Quinbrook Infrastructure Partners is a specialist in global investment management, with a focus on renewables, storage, and grid support infrastructure. Scout is a portfolio business.