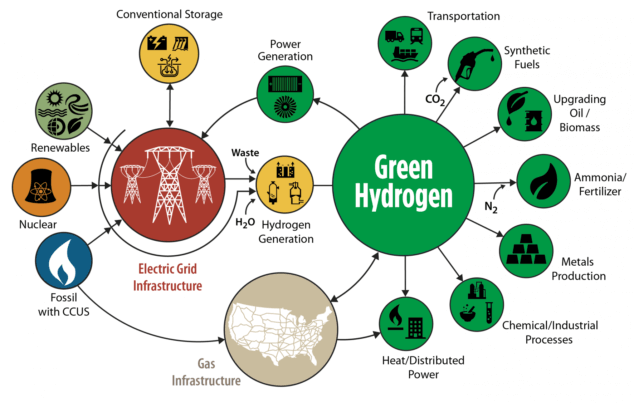 “We are very excited about our new business relationship with Verde and our plan to partner with operators of intermittent renewable power sites, such as wind and solar farms,” says David Lee, CEO of NewHydrogen. “Verde will manufacture the systems for NewHydrogen, which the company will purchase for use at the sites.”

The company is targeting solar farms and wind farms that produce excess sun and wind energy during certain hours of the day. This power can be used by an electrolyzer (primary component of a hydrogen generator), which converts water to green hydrogen. It is then distributed in pipelines and converted into electricity as needed. This green hydrogen can be stored underground and in tanks. It can be used to power industry and support electric grids. It is possible to turn unused energy into fuels, filling the gap between constant energy requirements and variable energy resources.

“For NewHydrogen, this is a major leap forward,” Dr. Lee adds. “By owning and controlling the hydrogen generators at these sites, we will be able to move very rapidly to demonstrate the economic viability of this approach, as well as new technology currently under development including our breakthrough catalysts.”

The goal of NewHydrogen’s sponsored research at UCLA is to lower the cost of green hydrogen by eliminating or drastically reducing the use of precious metals in electrolyzers. Electrolyzers rely on rare earth elements like platinum and iridium. These materials account for almost half of the cost of electrolyzers.

Parallel to this effort, researchers are developing hydrogen evolution reaction catalysts (HER) for alkaline electrodelyzers. They are currently working on platinum-based HER catalysts that use less platinum and a completely new type that doesn’t use any platinum. Both of these areas have seen significant progress to date. This is in line with the Company’s focus on developing OER catalysts to enable electrolyzers that cost less to manufacture and to operate.

“Prior to scaling up the process for studies with a prototype electrolyzer in late 2022, researchers will continue to explore additional improvements to both the OER and the HER catalysts to maximize the overall performance of an actual water electrolysis device,” Dr. Lee concludes.