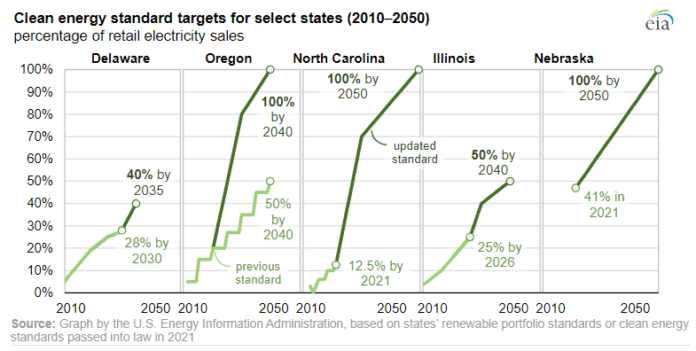 According to U.S Energy Information Administration (EIA), 31 states and the District of Columbia had either renewable portfolio standards (RPS), or clean energy standards, as of the end of 2021. These policies require electricity suppliers that they supply a certain percentage of their electricity from renewable resources or other eligible technologies. Four states – Delaware, Oregon, North Carolina, and Illinois – updated their RPS or CES policies in 2021. In December 2021, Nebraska also approved its first clean-energy goal, making it the 20th U.S. State to have 100% clean electricity by 2050.

In 2020, 67% of all electricity retail sales in the United States were accounted for by states with legally binding RPSs. Out of the 31 states with binding RPSs or CES policies there are seven states that have nonbinding renewable portfolio targets.

To define their RPS and CES policies, states use terms like carbon-free, clean, carbon-neutral or renewables. However, the definitions of these terms sometimes vary by state, which allows technologies that might not generally be considered renewable, such as nuclear energy or natural gas fitted with carbon-capture sequestration technology, to count toward the state’s policy target.

The Oregon legislature raised the state CES to a 100 percent clean energy share of sales in July 2021. Retail electricity providers must reduce CO2 emissions by 80% and 90% respectively by 2030 and 2035 in order to achieve the carbon-free target at 100% in 2040.

North Carolina increased its CES target from 12.5% to 100% by 2021. This was an increase from its previous target of 12.5% for electricity sales from renewable generation. The legislation includes an interim target of a 70% reduction in CO2 emissions from 2005 levels from electricity-generating facilities owned or operated by public electric utilities in the state by 2030.

Nebraska Public Power District approved in December 2021 a goal of 100% carbon-free electricity generation by 2050. Nebraska generated 41% of its total annual electricity in 2020 from carbon-free sources. This is what it considers the starting point to the new 100% clean Energy standard policy.